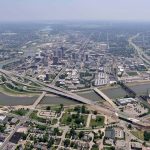 Each year, the US resettles somewhere between 40,000 and 80,000 refugees, with the past five years seeing numbers closer to the latter following a tightening of refugee acceptance across the globe in the immediate post 9/11 years (Betts and Loescher, 2011, Presidential Determination, 2011). Many refugees still find themselves settled in familiar gateway cities; however, as mentioned above, increasing numbers find their new homes to be in less “traditional” sites––meaning sites outside of the populous gateway cities that people tend to think of as epicenters of migration. This trend has been true for not only the secondary cities that have become more prominent in recent years, but also in small and mid-sized towns, often in regions that are much less diverse or accustomed to integrating newcomers.

This segment of the project includes three main components:

2) Maps that exhibit where refugees are being settled in recent years in comparison to the overall population and foreign-born population. These maps were created at both the city and state level for the FY 2012-2014 and FY2012-2015.

3) Interviews and surveys with members of federal, state, and voluntary agencies involved with refugee resettlement.

How US Refugee Resettlement Works

Where Are Refugees Being Resettled