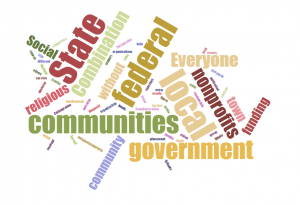 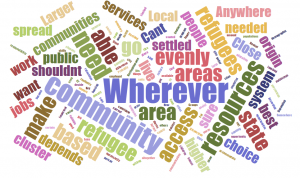 To collect baseline data for general public opinions on resettlement, four refugee-related questions were added to annual Vermonter Poll conducted by the Center for Rural Studies at the University of Vermont over the past three years. The results of these polls for 2015-2018 were analyzed both individually and in comparison to one another.

In comparing the results from 2015 to 2018, we found that despite an increase in the anti-immigrant rhetoric that has dominated recent political discourse (especially towards incoming Syrian and Iraqi refugees), we discovered that support for refugee resettlement in Vermont had actually increased between the four polls.

See our project updates on the Vermonter Poll at Project Updates, which includes a 3-year and 4-year analysis.

These charts show the comparison of responses for the years 2015-2017. This includes charts which compare the ‘Open-Responses’ to each question that surfaced in both years among the participants who decided to respond outside of the given choices. The percentages for the ‘Open-Responses are calculated using the total number of only these responses given, not from the total number of responses to each question.

The categories for the ‘Open-Responses’ to these questions were created by our research team based on the shared themes present throughout the participants’ answers. Therefore, the participants’ responses are not always word-for-word as they appear in our graphs.